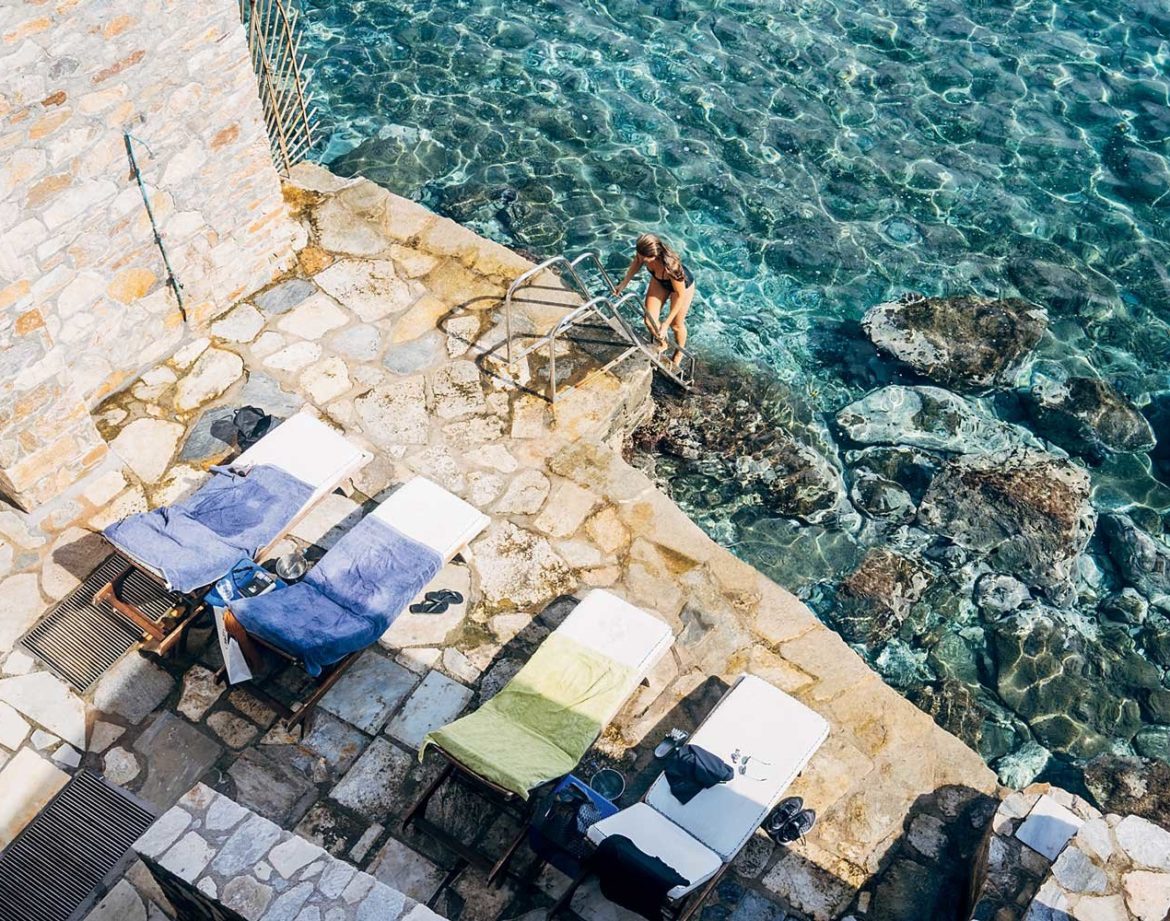 Syros may lack the white-sand wonders of its more popular neighbors. But for a certain kind of in-the-know traveler, that’s precisely its appeal.

As my husband, Emilio, and I lay on the deck of our Airbnb, I realized I’d run out of time to shower before the symphony. Eyeing the ladder that descended into the Aegean, I told Emilio that I would just jump into the ocean instead.

“Any time you can say that, it’s a good day,” he replied.

Every summer, after visiting my relatives in northern Greece, my husband and our two young children — Amalia, 6, and Nico, 3 — set out to discover someplace in the country new to us. We’d been on the Cycladic island of Syros for only half an hour, but we could already tell we’d made a good choice. On other islands, such as Syros’s neighbor, Mykonos, we’d debated whether to stay in town or on the beach. Here, we were in the heart of Ermoúpolis, the Cyclades’ capital — an Italianate dream of palazzos, theaters, and cafés that is home to half the population of Syros — but the sea was steps from our front door.

While Syros is on the same ferry line as Mykonos, it sees a fraction of that island’s foreign pilgrims, perhaps because it was long viewed as a commercial and industrial hub with massive shipbuilding operations. With fewer spectacular beaches than some of the Cyclades, Syros doesn’t fit the lazy-whitewashed-village-atop-a-sandy-shore vision most Americans have of the islands. The visitors who do come — the majority are from France and Scandinavia — are drawn by the festivals and thriving art scene, the more than 1,300 Neoclassical buildings, and the incredible cuisine.

If Ermoúpolis keeps Syros from being thought of as a desert-isle dream, the fact that the island has a thriving city by the sea makes it alluring to those interested in life beyond the beach. Bobbing in the waves opposite our room, I gazed up at the row of palazzos. Nearby, teenagers cannonballed off the large dock that is the town swimming spot. Atop the hill that rose behind them was the blue and gold dome of the church of Agios Nikolaos, patron saint of sailors. The view of Ermoúpolis from the sea, I realized, is even more stunning than the view of the sea from the land.

That evening, I found myself staring up again — this time at the ceiling of the Apollon Theater, which opened in 1864 and was modeled after La Scala and other Italian theaters. We were attending the opening night of the Festival of the Aegean, a two-week celebration of opera, music, and dance held every July. Before picking up his baton, the Greek-American conductor Peter Tiboris, the festival’s founder, urged the audience to notice the frescoes. The outer ring shows Verdi, Bellini, Dante, and Mozart; the inner ring Homer, Aeschylus, and Euripides.

The ceiling is a diplomatic representation of the blending of cultures that continues to thrive on Syros. Modern Syros was settled by the descendants of Venetian merchants who put down roots in Ano Syros, a village high above the harbor, in the 13th century. After the Greek War of Independence in the 1820s, refugees from the battle-scarred islands poured into Ano Syros — only to be forced down to the harbor by the residents. The newcomers, mostly sailors and merchants, prospered and brought in the Neoclassical architects who transformed Ermoúpolis from a rocky port into an elegant city. Today, the descendants of the Italians and Greeks are intermixed, and local couples often have two weddings, one right after the other — the first in a Catholic church, the second in a Greek Orthodox one.

Ermoúpolis is still full of the aristocratic buildings the refugees commissioned, most notably the ornate 1876 town hall. It overlooks Miaouli Square, a supersize version of the classic Greek plateia. Since this is Syros — where the population is twice that of Mykonos, although the islands are roughly the same size — the square has more locals than tourists. Often there are also opera singers or a temporary screen for a film festival.

“We host 15 festivals per year,” Thomai Mendrinou, the vice-mayor of culture, told me. There are festivals devoted to the accordion, the organ, and the guitar; to tango, jazz, and video art. Aside from two events run by the municipality, Mendrinou noted, “all of them were started by nonresidents who fell in love with the island.”

It was a story I heard again and again — the visitor enchanted by Syros who found a way to stay by indulging his or her passion. Over coffee on the deck of the Hotel Ploes (doubles from $205), a waterfront palazzo filled with antiques and modern art, Lia Mastoraki described the moment she and her husband, who dreamed of opening a boutique property, visited Syros and saw the building. “It was a completely emotional decision,” she admitted.

I’d felt something similar during my pretheater bath in the Aegean. I realized that this must be why so many travelers I had met were repeat visitors. They’ve found a place where they feel at home.

At Peri Tinos(entrées $9–$57), right on the harbor, I acted like a tourist when I Instagrammed my ceviche, which was spread atop a breadstick dyed fuchsia with beet juice. But I felt like I was eating with family when the waiter taught our kids how to fillet a fish. At night, in Ano Syros, an old man sitting outside his door directed us to the main street (“just follow the music”), where we ate at Lili’s (30-2281-088-087; entrées $10–$32). The taverna is virtually unchanged since it opened in 1953, with portraits of the owner’s grandparents on the walls.

The next day, back in Ermoúpolis, I made a pilgrimage to the Assumption of the Virgin Church to see an El Greco icon “discovered” in 1982. It had hung there, unnoticed, since it was brought to the island more than a century earlier, likely by a Cretan refugee. The icon getting the most attention that day, however, was one of the Virgin Mary laden with votives and jewelry left by grateful supplicants. It turned out that a fellow visitor, a man in shorts, had left his Rolex before the icon the previous summer. “Elias, you’re back!” the bearded priest shouted, embracing him.

I could have happily stayed in Ermoúpolis. But I wanted to explore the rest of the island. So we moved to Villa Evelina, part of White Key Villas (from $12,710 per week), which overlooks Ampela Beach. White Key manages more than 300 privately owned villas in Greece. With an infinity pool, a Jacuzzi, tennis courts, and access to a chapel, this one made me envy the owners who get to call it home, but it was also sunny and cozy. Amalia learned to snorkel in the shallow water off Ampela, and Emilio ventured to the submerged cliffs he described as “an underwater Grand Canyon.”

On most Greek islands, people drive from beach to beach. On Syros, it’s from restaurant to restaurant.

Our favorite was Allou Yialou (entrées $11–$46), in the beach town of Kini. The marinated red mullet came served on seasoning “sand” dotted with shells. When the waiter spotted Nico napping on two chairs pushed together, he found a beach towel to serve as a pillow.

In our last hour, I deposited my family opposite the ferry landing and went in search of loukoumi ice cream, which was inspired by the island’s famous pink Turkish delight. Not finding any, I settled for pistachio. Then, turning back toward the dock, I noticed a hole-in-the-wall sweetshop with a small ice cream counter. There it was.

I threw my half-eaten pistachio in the trash and bought a cone of the rose-flavored loukoumi. A minor sin as far as waste and gluttony go, but out of character for a mom who counts calories and limits showers to four minutes. Like so many others, I had fallen in love with Syros and lost all common sense.

Please fill in the log in or register forms

Any cookies that may not be particularly necessary for the website to function and is used specifically to collect user personal data via analytics, ads, other embedded contents are termed as non-necessary cookies. It is mandatory to procure user consent prior to running these cookies on your website.